As you may have noticed MacOS Big Sur is now in circulation. The first beta of 3.5.2 is focused on addressing a few issues that have cropped up when using Blocs on Big Sur.

I’ve not tested much on Big Sur so you may find more issues due to the nature of the OS beta being new.

@Norm
I’ve been trying to get Anchors targets to play nice in my Blocs websites. The work of @Malachiman may soon make it possible for us to finally link to Anchor targets inside collapsed Accordions, which is great. But we need Smooth Scroll too.

Right now, I can only see IDs of Blocs inside the “Target” popup menu (Interactions > Scroll to Target). You probably don’t want to clutter up that popup by adding all the #IDs we manually add on a given page, but could you add them into that popup if we press and hold the Option key while clicking the popup?

I don’t know what the best solution is for this, but I would love to see Smooth Scroll work when clicking a link that jumps you to an Anchor target.

There are still strange things going on in the left sidebar – things very similar to what I have reported before. After workin in v.3.5.2 (or any version of Blocs) for a little while (usually 15 minutes or less), the left sidebar becomes inaccurate in sections. For example, the in the screenshot below, note that even though I clearly have a Column selected on the page at right, the left sidebar incorrectly shows it as a List Item! This forces me to restart Blocs to fix it. Suffice it to say, I restart Blocs a lot! 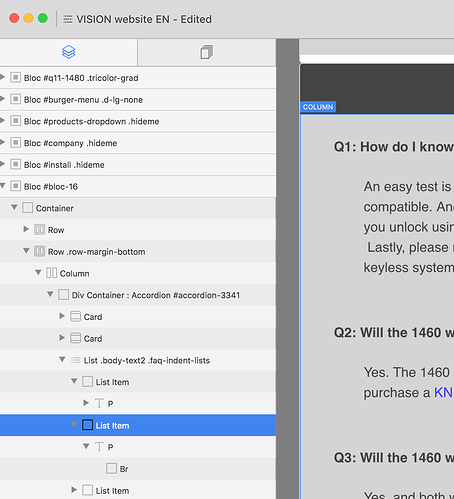 It seems like everything in the sidebar gets shifted around. When I click on List on the same page, for example, it shows as CARD on the page. What I see on the page is correct though. The labels in the left sidebar are wrong. 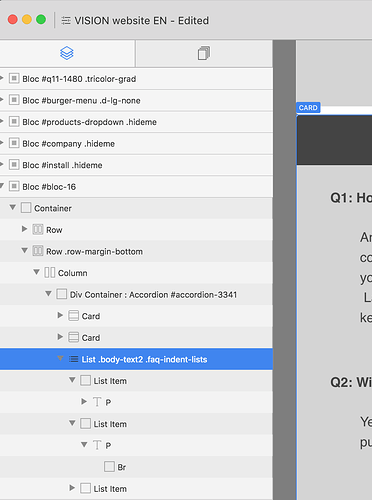 It would also be great to see a new feature that would let us clean up Classes. My style.css us 117kb and growing!

I want to tell Blocs to “Delete all unused Classes.” Of course, Blocs would need to know if the classes are actually used in order to do that.

The big problem is, when you start typing something in the Classes field of the right sidebar and make a spelling mistake, sometimes that gets entered as a new class. And if you are busy and don’t have time to manually delete that silly “mistake class,” then you will forget about it and that will be yet another unused class that makes style.css grow without end.

typing something in the Classes field of the right sidebar and make a spelling mistake, sometimes that gets entered as a new class. And if you are busy and don’t have time to manually delete that silly “mistake class,” then you will forget about it and that will be yet another unused class that makes style.css grow without end

Tell me all about it

WOW.
@Norm you’re fast. Runs smooth and no issues so far.
I keep on testing.

Tell me all about it

I would like to take my feature request a step further by saying that all pages in a Blocs document which are set to NOT export should have their classes NOT written to style.css. What does this matter? Well, because Blocs won’t let me copy/paste content easily and quickly between documents, what I am forced to do is build a site in Japanese, then when finished, duplicate that document and redo all the text in English, since our websites have both languages. But it takes a long time to rebuild everything, so I build one page at a time and upload them, setting all other pages to NOT export. However, my style.css is jam packed with all the styles from all the pages! And another problem is that when doing my English site, I will inevitably make new classes and find myself not using some old ones, which again is why we need a style.css cleaner feature in Blocs.

@JDW I also experimented with multilingual sites, in the end I created a separate Blocs project for each language, I finished a project and then duplicated it. That seemed the best way to me. So each webpage stands alone and gets exported in its subfolder.

This exists, you’ll see it soon

Most of them are just UI alignment issues with popovers and text clipping in the UI.

I totally agree with you on that. Plus I tend to make test classes a lot and it’s annoying having to ‘look for them’ to clean up

If you define “projects” as “Blocs documents,” then that is what I am doing for now. If I could copy content from one document to another, like I can do so very easily in SoftPress Freeway, it would save me an ENORMOUS amount of work. You see, even though I create my Japanese documents first, then duplicate and redo all the text in English as separate documents, uploading to different folders on my server, the fact remains that I will eventually build new content in my Japanese documents that I want so very badly to copy over to my English documents. Some people have tried to show me Bric creation hacks as a workaround, but that is so much more time consuming and fiddly when compared to lightening fast Copy/Paste that I refuse to use it. It’s easier for me to rebuild the content at times than fiddle with Bric creation and import.

I would DIE for Copy/Paste among Blocs documents! If Blocs 4 has that feature, I think the earth will shatter apart from my sheer exuberation alone!

Use the template feature instead.

I see how to CREATE a Template… 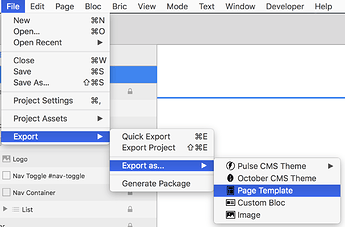 But I do not see how to PLACE that same Template into my open Blocs website document, which is what I want. Adobe apps give a PLACE comment to drop saved document content into another document.

But even if there was a PLACE command, it’s still more fiddly than superfast COPY & PASTE. Even though Blocs doesn’t allow me to keep more than 1 document open at once (which also needs to be remedied once Copy and Paste is implemented), at least Copy & Paste would allow me to open one doc, copy a Bloc or even part of a Bloc from one page, then close, then open another document, then Paste. Bam! Done! That’s what I want. You know you want it too. Admit it. It would make life so much easier!

You know you want it too. Admit it.

Not really. I think my work flow is different from yours.

I think my work flow is different from yours.

I will admit there are some people who like to do things the hard way. But for me, the speed and ease of Copy & Paste is unparalleled by anything else. And the fact is, when you’ve been using another web design app since 1999 (Freeway Pro), moving to Blocs is somewhat of a wakeup call! There’s no moving back to Freeway for me, but the features it offers still appeal. Copy & Paste among multiple open documents ranks high on my list!

@JDW I also used Freeway Pro once upon a time, but I have never yet seen an attractive, modern and mobile friendly website built with Freeway Pro. At the time I was very much an occasional amateur user, but I still ditched it back in 2014 after years of frustration at the lack of real progress.

A couple years later they folded and this shouldn’t have surprised anybody paying attention. Freeway had an ancient code base predating OS X. It started life as an entirely different app used for print publication and was clearly falling behind the competition. In stark contrast the code base for Blocs is constantly updated with a growing user base.

Blocs is not perfect and no app with this level of complication is ever finished, though I imagine version 4 will add numerous features and open up all kinds possibilities. I would also like to copy paste from one project to another occasionally, but given the ability to save individual brics, blocs and templates for use in any other project I find it hard to get that wound up about the issue. Deleting unused classes is far more useful and that is coming.

If the ability to copy paste between open documents is really that important give Rapidweaver a try. That’s another app I left behind a few years ago for similar reasons that I wouldn’t bet on being around in five years time.

I will admit there are some people who like to do things the hard way.

My “hard way” works well for me, almost as if it was easier

Folks may I remind you, that this thread is all about Blocs 3.5.2 Beta Build 1 and MacOS Big Sur.
Thank you.