Here is Blocs v3.5.2 (beta build 4), this release is again, focused on stability. Applying a range of patches for some outstanding issues.

I’d now like to thank @MiguelR & @Bootsie for testing in the earlier thread. I think the reason I am seeing things you gentlemen are not isn’t because of the OS difference (indeed, Miguel confirmed it isn’t), but due to the fact that I am using a real document with the Betas. I know we aren’t supposed to do that, but at some point when I feel a beta is stable enough, I plow ahead and use it for real work. There’s a risk in doing that, but I get the benefit of fixes AND I can test the Beta better. So I end I spending all day working on multiple documents in a Beta, and then strangeness like the Blocs preview button happens. Meaning, it didn’t happen right away when I first opened my document. There are things that time time to show themselves in Blocs. And ultimately, when I restart my iMac, there are times these crazy things vanish, as was the case with the Blocs Preview. Then there are other bugs that don’t go away, and I end up formally reporting those to Norm in the Bug Reporter.

But there have been times when I was unsure something was a bug, and I posted here, and some of you very kindly tested and confirmed the problem, which led me to then report it formally.

So again, I appreciate your kind help with testing what I sometimes think are bugs. I still think there is a bug in there somewhere to have caused my Blocs preview to lockup, but when you restart and it goes away and doesn’t come back for days or hours, it’s really hard to nail down. And bugs that cannot be easily repeated tend to be unfixable.

Love the new nav behavior this is next level improvement and a very unique touchup,
perfect!

The problem I reported in our Build 3 discussion is happening again in Build 4. It takes a long time of working in Blocs, but it eventually rears its ugly head. When the problem happens, Blocs won’t preview on the first click, and I cannot preview in the browser using the menu command, and when I chose Quick Export and do a Replace, I no longer get the dialog that asks me if I want to Replace All. Relaunching Blocs does NOT fix the problem. A restart fixed it last time. I am just too busy to do that right now.

Hi @JDW, I’m facing exactly the same issue on Catalina and did a bug report to make @Norm aware.
Even restarting is not solving the issue for me.

I’m taking a few weeks off coding to chill with family, I’ll be around for support etc, but won’t be pushing betas for a few weeks.

@Norm Have a good chill - you deserve it!

when uploading a pdf it on the browser retains the favicon of blocs and not the one I added to the site ?

Craziness in the left sidebar continues in B4… 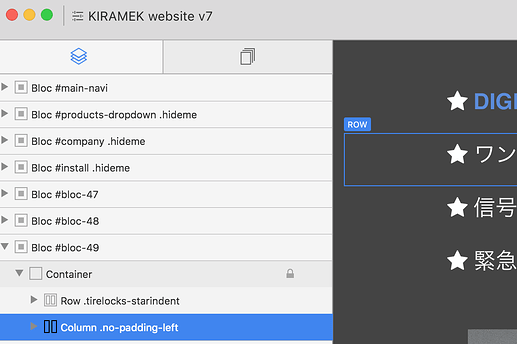 (Selected Row on page shows as a “Column” in sidebar.)

I will need to work in my document in 3.5.1 for a much longer time to know for sure. The sidebar problem in b4 didn’t occur until several hours after working in my document today.