Hey everyone, I hope you had a great weekend. Here is Blocs 4.2.1 beta build 2. This build includes a few more fixes and a new language selector in the main application preferences so you can now easily set the Blocs application interface language independently to the OS.

No scroll to top icon on mobile, whether iPhone or Android on the live site.

White bar on side menu is back in Firefox, despite having nav-special class in project.

Still seeing issues with the visibility glitch in this beta. It’s fine when viewed in Blocs after making the suggested changes, but apparently still broken when tested in all browsers online, including a device that has not previously visited the site. Almost like the changes haven’t been exported and this is after I had that save issue mentioned with the previous beta.

Hi Norm.
Carousel works fine now.
The only thing I had to tweek was remove the underline in all the text links (2min job)
ps…scroll to top seems OK on safari on imac & on iphone

This is the result:

And i can’t change the font for navigation.

Just my 2 cents. Could it be related to the Page Transition Bric? I just saw it got an update today according to the Blocs Store. https://blocs.store/product/page-transition/

Has the latest beta been pulled? Can’t find it on the Blocs Beta page.

Hamburger menu doesn’t work at all

There’s a substantial part code missing when exported. Data toggle and Data target are not there so the button (hamburger) will not work. Is the hamburger working in preview?

Scroll to top missing (Safari only)

For me it’s there.

I would try to export the file without overwriting the old one (clean export) and do the same on the server.

Scroll to topmost definitely not there on my iPhone!

For me it’s there.

I always do clean exports, so no issue there.

I just deleted my entire website from the server except my robots.txt and did a clean publish.

No change at all with any of the issues 🥲

No that is not the problem.

Apologies, I’ve deleted the post above as things have changed yet again.

This is the current situation:

After a second clean publish, all issues on iOS have disappeared in all browsers.

On macOS, Safari works perfectly, but issues which at first appeared to be fixed by 4.2.1 have returned on Firefox and Chrome…

Sort of getting there…

Just a thought, these are my export settings… it takes a better brain than mine to tell if this is the issue! 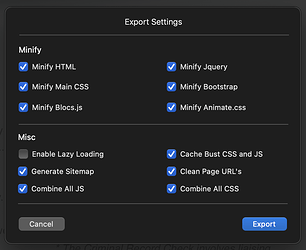 Uncheck combine all CSS and Combine all JS. These 2 can be troublesome.

Some issues have only recently cropped up as many do not join in with testing. There will be a new beta tomorrow for 4.2.2 with a few more hot fixes.