This release adds support for PHP previewing on MacOS Monterey, support for those new MacBook Pro notches and a few other fixes and optimisations.

I’m still working on some other fixes for various reports, so if your fix is not noted in the release notes its still being worked on.

Happy testing and thanks for the support!

Going to preview just showed a bit of text where the project name is usually that said local preview not available. It disappeared after switching to edit and back again.

N.B Not had any more save issues since b2 was installed.

That is normal if the local URL cant be generated.

Let me know if you see and improvement with installing fonts.

Looks pretty sweet. Temperature went up to about 65C as 26 fonts were installed but not 100C like before. Also the Blocs web content peaked at around 7% instead of 100% as before. No fans at all.

Bonus points because I can also select the font correctly straight afterwards as a custom class, which wasn’t working before without restarting Blocs.

There is one other MAJOR improvement though. Text input could be a little laggy before on this mini with around 350 fonts installed. Now it seems to be instant and that has been a longstanding performance bottleneck.

One small feature suggestion. It would be nice if the font manager had a quick search feature to check is specific fonts were installed.

Yeah I plan on giving the font manager a spice up in the next major release. Glass it’s working better!

I mentioned it with the last beta but this seems to be a bit of an issue where links inside accordions do not go to the intended destination, whether internal or external, including email. Instead they close the open card and I’ve seen this now on a couple projects using 4.4.1 but not before.

I’m now able to exclude a bloc from export and it shows in layer tree, although I don’t see the little red flag thingy in edit window. Not a big deal for me.

Also, I have an accordion with an external link inside that work OK in preview for me, although I originally created the accordion in an earlier Blocs version.

Thanks for the quick support!!!

I’ve discovered the cause of this problem with the accordion. It happened after adding a stretched-link class to the link in the card header to enable opening from any part of that area. It overrides any link settings within the card body that show in the side panel.

I am just updating an old site and wondering if there is a reason why the menu will open on hover at LG but not at MD. I have simply selected the option in the sidebar. It is set to toggle at SM.

EDIT: Added a quick video here on a brand new project with nothing but a navbar and cannot help thinking the dropdown on hover should work at MD and not just LG.

I have sent in a fully detailed bug report with ticket #21655 but I was surprised to have this pop up while editing a navbar just now. I don’t think I’ve ever seen that before with Blocs. 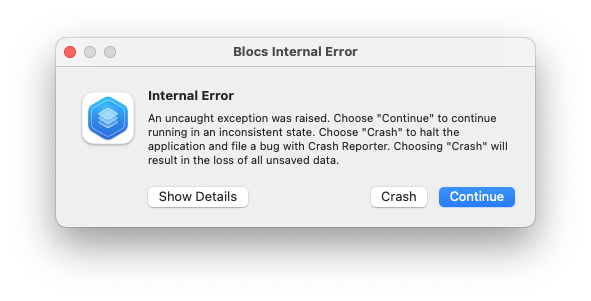 I had them on the M1 frequently dating back to 4.2 if not mistaken. In B3 they start appearing again. I reported the same.

I am on intel running Big Sur.

This is the debugging alerts, we use them internally for testing but I’m starting to leave them enabled in the betas as they help to track down silent (soft) crashes.

Might just be something exclusive to MacOS High Sierra, but I’ve noticed that the icon in the bottom left corner of the window looks strange: 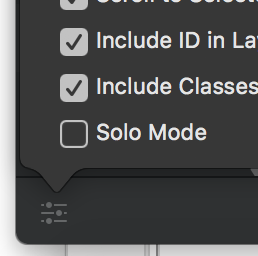 Oh that’s odd, I’m not seeing it on Big Sur or Monterey.

This has been happening to me since v3.x But it seems to be intermittent. It doesn’t happen all the time and it doesn’t always happen to the same icons. See below… this is happening on the help button. This is also the latest Blocs version. 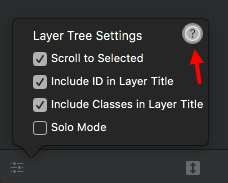 btw… this is a minor thing to me. It doesn’t affect the performance of Blocs (for me). It was only a little confusing at first - as I thought it had a purpose. Once I realized it was an intermittent issue with rendering, I just learned to ignore it.

Interesting. I don’t have any issues duplicating pages.