Christmas is almost here, so here is a little early present!

Happy testing and thanks for the support from those of you who help to test!

Hey Blocs translators, if you get a spare 5 mins it would be great if you could help to translate some of the outstanding translations for Blocs. I really appreciate all of your help

A couple small things picked up yesterday. If I use the class form-control::placeholder and change the font it shows in edit, but not in preview or when published. That has happened before but I thought it was resolved at some point.

Also if I add a modal bric some icons are fractionally clipped at the sides in the normal state, but not in hover. To avoid this I ended up adding 5px of padding to the close class.

Hey, @norm. When applying a texture to a video background it only shows for a split second before the background video starts playing. Using BS5.

Blocs is still recording links to images in the CSS, which have previously been removed from the project causing 404 not found errors. In the latest instance it involves a couple hero background images that were applied via custom class.

The same is happening with the follow links bric showing a 404 error for the linkedin page, even though none is included on the page.

It is also sometimes exporting empty img folders, though all images are remotely hosted elsewhere.

Has anyone else noticed this quirk? Btw, I think this quirk occurs with Blocs 4.4.2 too. 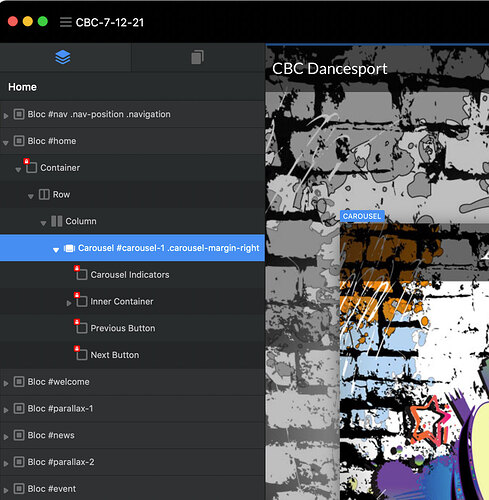 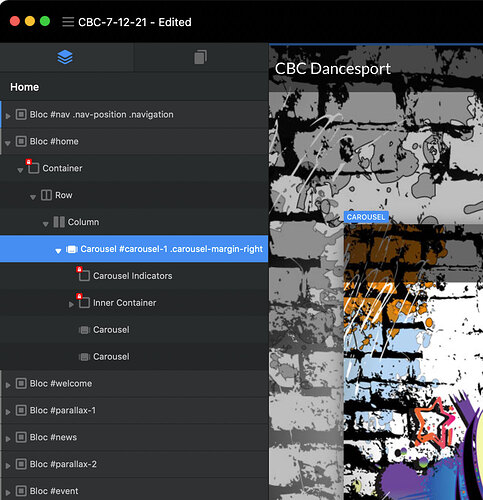 minor quirk with a Carousel object when converting a Blocs 4.4.3b1 project from bs4 to bs5.

Seems to be like that in a BS5 project too, not just migrated one.

I’ll take a look at that

It is also sometimes exporting empty img folders, though all images are remotely hosted elsewhere.

I have just had the same thing happen with the downloads folder and discovered the trigger. If I export while in edit mode it is correct, but if I export from preview it exports empty folders such as img and downloads that are not needed.

Lately I’ve had a few occasions with this beta where Blocs opens fine, but then trying to open a project can take anything up to a minute with spinning ball and these are small 5 page sites without heavy graphics. This is new and never seen before, but once opened I can try again and the project opens in a second.

I’ve had this today. I think the issue may be font loading via Google. Not sure if you have them enabled.

Not one Google font here.

Hey, @Norm. When changing the font type in a span to Helvetia Blocs crashes. It seems to be only an issue with Helvetia as I tried a few other fonts as well without issues. It happens on V4.4.2 and V4.4.3B1.

I can confirm that happened to me a few times in recent months.

I can’t replicate, so is this an M1 issue?

No crash here either on Intel.

I believe yes as I can’t replicate on my Intel.

EDIT: I can’t replicate it on my Ipad as well…

I’m hoping to get 4.5 beta one out next week so I’ll get this looked at for that release.

) as an image Bric. It sits there nicely for a couple of weeks now it doesn’t want to go back to its previous life without removing and re-installing.

HOWEVER, reinstalling is a challenge! The double character input is still around and when (finally) typed the full Bric name it’s not appearing.

I’m not sure recapture is in the store. That’s auto installed by Blocs as it comes bundled with the app.