I recently had an issue with a bric, I thought it was not working with BS5 but the issue was I have an older version. In order to update, I have to guess there was an update, I went to gumroad, downloaded the latest version and installed. Now I have 13 more brics to update.

I manually updated tab anything pro and scroll fx extras, but before this the extension manager did not tell there were updates for this brics. I am using the latest stable version of blocs

@Norm can check this? 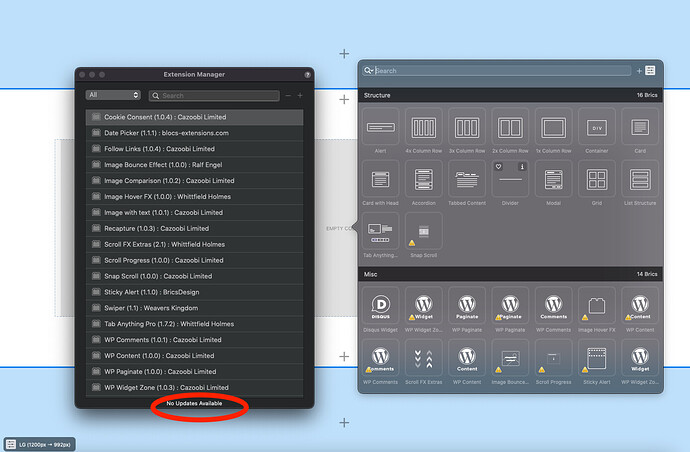 Depends how old the Bric was. In-app update was added roughly a year ago I think, possibly longer…

So if your version of the Bric was older, it may not have been supported when it was compiled.

My extension Manager is showing the update flag for a few Brics so its working. 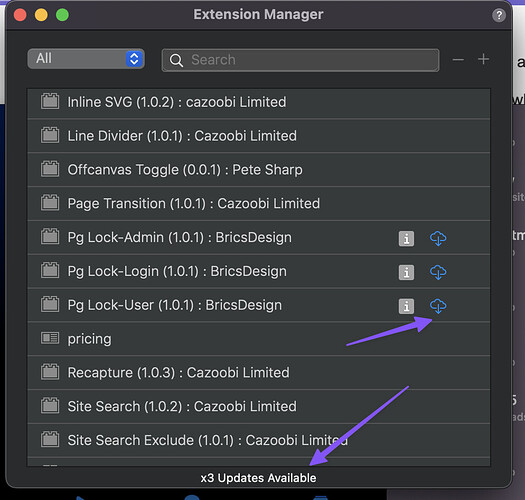 For the last few days checking for updates is very slow indeed. It’s taking minutes to either show an update or confirm nothing is available.

I have several brics that are not updated to work with the new framework and my extension manager says is all up to date. Most of them are from you norm 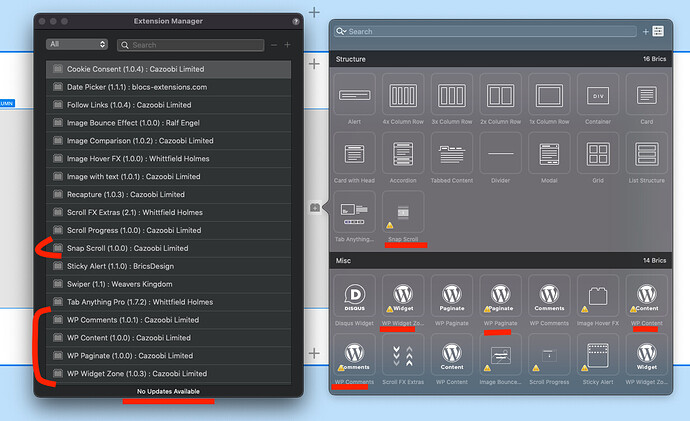 Most of those look like they are migrated over and are very early versions that don’t support in-app update.

The in-app update functionality needed to be added to the Bric, so if you have a version prior to this being added it wont be able to auto update.

For example snap scroll 1.0.0 doesn’t support in-app updates, that was added in version 1.0.1. So the version you have doesn’t even know in-app updates exists or to look for them.

Some you can just re-download like snap scroll and install over the top of the current version manually.

You can get all of the Wordpress ones here.

This is down to the server responses from the developers servers.

At first I thought this was definitely @Whittfield brics, because it appeared to be very slow fetching his last two updates. Today there was nothing available, yet it still kept me waiting a few minutes.

It might be useful if there was a means of seeing where the slowdown was occurring. This only started a few days ago. At the moment I open Blocs and literally waiting 5 minutes just to see if there is an update in the extension manager.

Thats an odd one, I don’t get that here so it would appear one of the Brics is slowing this down.

That’s my thought as well. It would be useful if we could pinpoint the culprit so checks could be made. It might be a network issue between my router or ISP and the bric’s server or more general affecting other users.

Whittfield’s updates were near instant for me. Maybe it was a temporary server issue.

I am still seeing it now, but no way to pinpoint which is the slow one. Perhaps it could be tweaked so that bric updates appear as they become ready, rather than holding up everything for a slow responding server that may not even have an update available.

This was checking just now for 5 minutes before reporting there were no updates available. Perhaps it needs a timeout function if a server is not responding, along with an indicator of where the problem lies, so we could inform the developer. It might well be there is an old bric installed that is no longer even available for download, but we have no way of knowing.

Just my 2 cents to the discussion. It took 3 minutes and 20 seconds for the extension manager to find 2 updates.

How many Brics installed?

) including cazoobi.
It took also 3.x minutes. It never was this way.

This is my case: 1 minute est. and 18 brics.
Update fails but it shows the newer version until I quit and enter again

Same issue here with the newest release version. I know there are updates, but I guess I did not wait long enough. Maybe it would be a good idea to have a status or progress bar telling us something is happening.