Norm, please add ability to disable arrows like indicators. And posibility to add interactions to slides. I hope to see that in 2.4.1 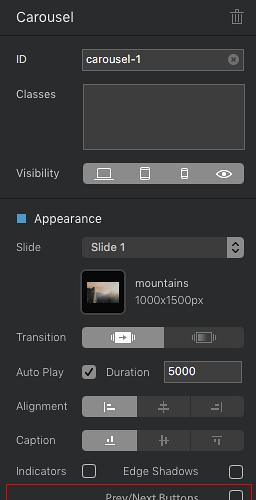 Just a thought, until they get it built in but you can add this manually if you want. Either with an html object or a button, etc. In the HREF just add the javascript slide control you want:

It’s already available if you open the class panel. Click on the drop down and you will see options for arrows and indicators. No need for coding.

I am unable to find that. Can you show me? Screenshot whould be very helpful.

This is very interesting. Maybe you can help me to add link to slide?

I see the option for indicators, just not arrows. Maybe its in the beta version?

you can use this to go to a specific slide number. 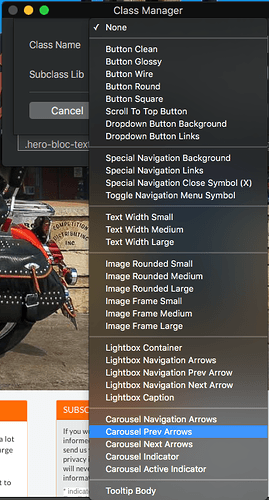 Ehey!!! Thank you so much! High five!

I can’t see how to change the arrow color from, say, white to black. I’ve added the subclasses mentioned in this thread, but neither the Style nor Type color settings did anything to the arrow color. Instead, they seem to only control the background around those arrows (which I don’t want – see diagram). By contrast, I was able to change the the indicator colors with no problem.

I don’t know the answer to this specific question, but on the subject of carousel options I’d like to see alt tags for images and also the ability to add x1, x2 and x3 resolution.

I’ve been working with carousels quite a bit, and have noticed some strange things happening in 2.5.0 b5.

Another note:
When adding many images to a carousel (say 10) I need to go to each slide and then scroll through the image gallery to find the needed image. As I do this any image I mouse over will (at least briefly) appear in the carousel (or sometimes nearby regions) because of the way Blocs works – I find this very distracting, and wish there was an option to have Blocs only place an image when you make a definite decision, like clicking, double clicking, (or right clicking?). I know there’s some cool factor to not having to drag things with the mouse all the time, but there can also be an unintended annoyance factor as well, so it would be nice if there were a preference for this behavior. On the other hand, I’m also getting used to it.