Surprisingly, there was no Wish List request for this important feature until my request just now. I am well aware of the workarounds, but they are no substitute for a built-in feature that works site-wide without having to fiddle with bric manipulations on individual pages.

I want to be able to search one page or all pages in my Blocs document for words and have the option to replace them.

I also want the ability to search for or view all URLs in an entire document. I am talking about URLs that I manually typed in the past. That way I can change them sitewide quickly and easily. This is very important because I cannot always remember WHERE I typed a particular URL. SoftPress Freeway has long had this important feature, so I’d love to see it come to Blocs!

Great suggestion! It would save so much time…

I am busy with a project where i need this option as well, would be nice if this would be possible.

This weekend I was testing the new template feature of the recent Blocs api update. It’s really impressive how fast the previews/exports are built. I made this Find and Replace bric (FAR) that modifies a custom .js file and let’s you find and replace words and phrases across a whole page or your entire site. Note that if you can edit the content reasonably quick then don’t reach for this Bric in production. However at the very least there are some cases where it’s probably going to come in hand…

Could this free Bric available on the blocs.store Find & Replace from @Whittfield be a solution ?

Could this free Bric available on the blocs.store Find & Replace from @Whittfield be a solution ?

No, for reasons I already state in my opening post. Indeed, my “workarounds” text link leads to Whittfield’s Bric. My proposed Wish List request is for a seamless solution that works sitewide, without having to add some fiddly Bric to each and every page. For example, SoftPress Freeway Pro has allowed people to search and replace text site wide since 1999… 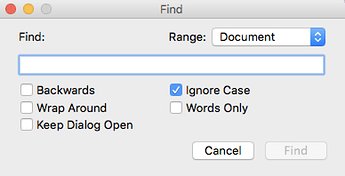 Since I have switched from Freeway to Blocs, I would like to see a similar feature in Blocs.

I remember this feature in Freeway, though I think it was a while before they translated it from Latin

Yes it would be useful on larger sites and I’d like to see this as a built in feature. The ability to change URLs entered in the side panel sounds like it would be tricky, but I would have thought general text in the main body should be possible.

As always it’s question of priorities but I imagine we’ll see this at some point. Out of curiosity I just checked and it looks like Rapidweaver doesn’t have this either. On a side note it’s probably worth adding that an awful lot of features found in Freeway were probably much easier to implement, because there was a lot less complexity overall.

Agreed, this is very important, a “Standard” in any application…

One of the issues I’m hitting as a new blocs user is I expect to handle layout and content creation within Blocs, as not every site si single-page nor handing off to a CMS.

Basic file management and general editing quirks and gaps, such as find/replace - are pretty much table stakes. Hope this will be addressed. I actually need it right now/today to update across some 20+ files.