How to turn off youtube’s advertising and related video functions

Hi, I’ve searched the forum but not found a way to prevent other video thumbnails from appearing at the end of an embedded youtube video on our website. I’ve googled the problem and the ?rel=0 addition to the embed code no longer works. The option is no longer shown on the embed code page on youtube. Has anyone found a successful solution ?

The problem with 3rd party services like this is that you are constantly battling with processes they control, whether it be analytics or issues like this. The easiest solution is simply to self host the video on your own server and link to it in Blocs. It also protects you from potential GDPR issues.

Thanks Flashman. That was an option I’d considered and could be the final option I choose.

I built a site a few years ago that included a video through Vimeo and found it incredibly frustrating, because the page loading was made slow by their silly calls for analytics to another server on the other side of the world. Then they introduced a system that would start the video at a super low resolution and only improve after they had decided the internet connection was fast enough, but it clearly wasn’t working well.

The Youtube player was a bit ugly and there was the constant issue of advertising, so in the end I just started self hosting and always do the same now.

Well, I use youtube videos quiet a lot on my pages.
There are integrated in HTML brics as Iframes.
The trick is, you need to use the settings in youtube to avoide following videos.
If you do work on the settings at their page youtube will create the Iframe code accordingly.
Works super… You only have to fiddle around a bit and learn how to use the settings.

Great question! I often wondered if that was possible.

You can change what previews are shown after your video finishes or choose not to have any. It’s somewhere in the settings on YouTube. I had to do that for my own website as well. Warm Regards

you need to append “?rel=0” to the end of your video address: 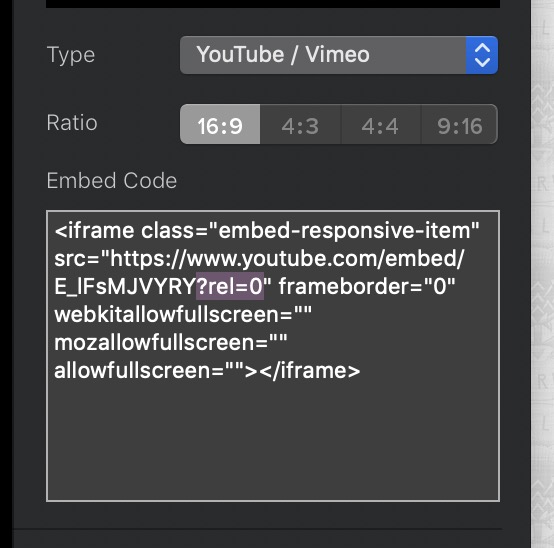 But they’ve switched it off very recently as a policy change. It has improved things on some of my videos which now only show related videos in my channel, but other ones show all kinds of other crap when the film finishes which looks nasty

Problem with hosting them on Blocs is that you lose all the functionality whereby high resolution is shown to folk with fast connections, and people with poor connections get the lower quality version - some pretty clever tech that is going to be impossible to replicate.

I think I’ll give Vimeo’s paid plan a go, although Flashman’s comments above are noted. Will let you know how I get on