So I just purchased the Image Overlay from the Blocs store. I’ve installed it and I’m able to add the bric. The issue is that when I select it, the Inspector Panel doesn’t change to the options for the Image Overlay bloc. I keeps the same Inspector Panel for whatever bric you had selected previously. Is it no longer compatible? I’ve restarted Blocs, my computer, reinstalled the extension, anything I can think of. Does anyone else have this problem? 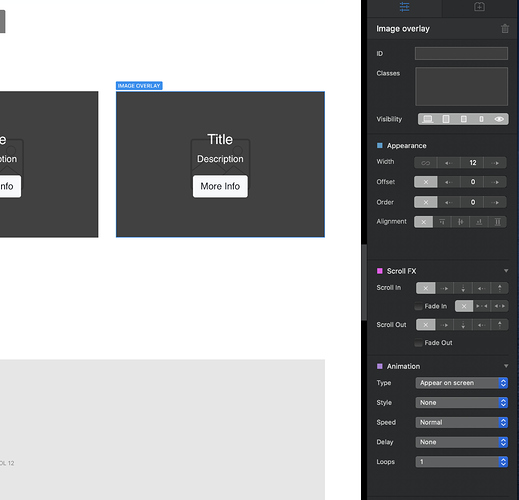 I’m not expert whatsoever. However, I have this “image overlay” installed also and I just created a very small project to see what I came up with. I placed a header bloc and then a carousel brick with 3 images in that. I then placed the “image overlay” under that and it played out perfectly. But I wouldn’t be surprised at what Blocs deals up to you after my morning’s effort. For the life of me, “toggle visibility” on a small project just wouldn’t behave itself. It took me the whole of the morning and numerous back to square ones before I scrapped the project and started afresh. Then the little …worked like a charm. Good luck and my sympathy goes out to you. I also had problems with menus not behaving as they should have. Gave it a rest and when I came back, all worked just fine.

I wonder if I should delete the Blocs app entirely, reinstall it and add the extensions again. If I delete Blocs, it’s not going to break any sites I’m currently working on correct? Sorry to ask but I just want to be sure before I do it and possibly lose all my work.

Once again there are many many more experts here to help with your problem. But why not just delete the “image overlay” bric or the “bloc” where it is currently residing and then try a new bloc and “image overlay” bric instead of scraping the whole of the project which you have spent so much time on! Just my suggestion. But there again, you most likely have already done that quite a few times already before seeking help here. Good luck.