First and foremost a very happy new year. I wish you a good health (the only thing that matters nowadays) and that 2022 will bring you everything you desire.

I’ve just set my latest site built with Blocs live: https://wpsweeper.com. Any and all feedback is very much welcomed!

It’s the site for my own tool, WP Sweeper, which is a shell script that automates cleaning hacked WordPress sites, by replacing the WordPress core files, plugin files and theme files. It also has a malware scanner on board. And all actions while running the script are also logged into a report (making it easy for you to inform your customer on the actions taken).

I’ve spent the past 2 years learning Shell scripting and figuring out how to optimize my workflow of cleaning hacked WordPress sites, as this is something I’m asked to do quite often. As I’ve already cleaned over 1000 sites with this script, I reckon it is time to present my project to the world.

And for all you awesome folks here I’ve created a coupon code that will give you 20% of the price, even on the LIFETIME LAUNCH PROMO. Just because all of you here are amazing!

Congratulations on the launch!
Found something on your site:

Thanks! I’ll look to fix that asap. No idea how I could’ve missed that one.

Congrats on the new site. I’m sure a lot of work went in to this. I went through it a little on my laptop and ipad. I noticed some problems with text running to the right edge of some headers on the iPad. 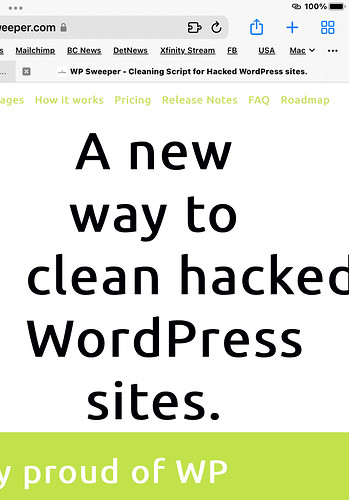 Some other issues below. 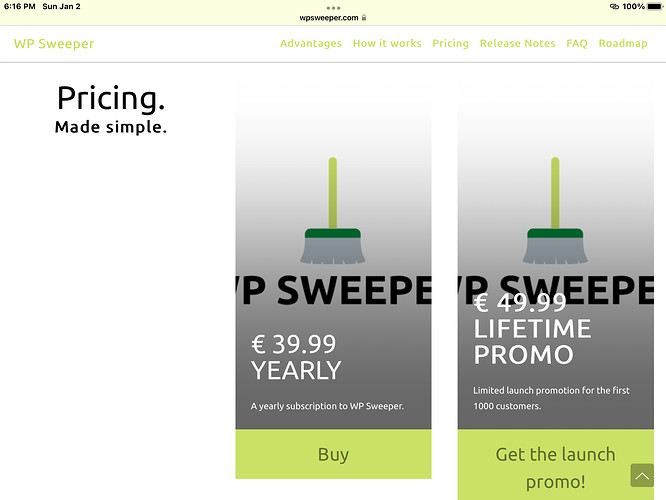 I also found the lighter green menu items hard to read, maybe choose a darker color for more contrast? It may just be me, I just had to look hard to read the menu.
Casey

Thanks for the input @casey1823, I’ll try to fix those throughout the day.

Congratulations on launching this. I couldn’t help noticing that you have some error messages in the page source.

Now it reads well, and the darker green adds more of a contrasting color, I was going to suggest using the darker green from the broom. Even the small P text in the dark green is much improved.

It looks nice; good luck with the site.
Casey

Thank you Casey. I was in doubt of using the lighter or darker colour from the logo. Obviously, my initial choice was wrong. Like it better myself this way too. Doesn’t “scream” as much as the lighter green towards the visitor.

Congrats man, 2 years of dedication to WP Sweeper and a thousand projected tested, you are no doubt excited about telling the world. My desire for you is that a thousand get to use your service.

Having some time with WP I am ware it can get “broken”, so when I see this it made me wonder if WP is being backed up, before the service is started.

Also, it’s never a good idea to update Plugins automatically or to the new version, so are there options to update the ones that are compatible to your current version of WP?

Are there any issues rebuilding a custom-built theme?

WP Sweeper generates a report (date and time tagged) containing a listing of all actions performed and their results.

Would you reply with an example of the report or a link for this report, please?

Requirements
A linux server with the ability to run shell scripts.

Besides contacting our Host, how can we know if the root is “Linux” based?

Thanks for those kind words, @KBConcepts

To be honest, those two years also included about 2 months of learning shell scripting. But the rest was all spent writing, testing, rewriting, retesting, … the code of WP Sweeper.

An important factor is that WP Sweeper isn’t an update tool, but more a crash-recovery tool in case of hacks. So it will replace the current version of WordPress with clean files of the exact same release, which is especially handy when the hack is so extensive you don’t have back-end access anymore.

As for the backups:
Version 1.1 will bring Restore Point support, meaning a backup can be made before initiating the actions and thus providing an easy means of rolling back (both files and database!) in case something does go wrong. This should go live later this month.

Are there any issues rebuilding a custom-built theme?

At this point WP Sweeper will only be able to replace the source code for themes available on the wordpress.org repository. However, I am looking into developing features that will allow you to use custom repositories too.

Would you reply with an example of the report or a link for this report, please?

To be fair I did not run the malware scan, so this isn’t included, as my site is free of any infections and you wouldn’t be much with an empty report section. But the above does give you an example of how such a log file would look like.

By saving them as simple text-files with the “.log”-extension, they can be opened in any text-editor.

Besides contacting our Host, how can we know if the root is “Linux” based?

Actually most hosting providers already indicate if it is Linux based. And to be fair, the most part is, since Windows-based hosting requires extra costly licenses for the operating system. A good indicator would be any Apache and MySQL references being present.

Thank you, @brechtryckaert for taking the time to put this together.

You’re most welcome. It took me 2 years to get to this point. What’s 5 minutes when taking into account everything I’ve gained from everyones replies and help here?

It seems they are all directly linked to Gumroad code being loaded. I’ll investigate further.

This is how the social links looks on iPhone 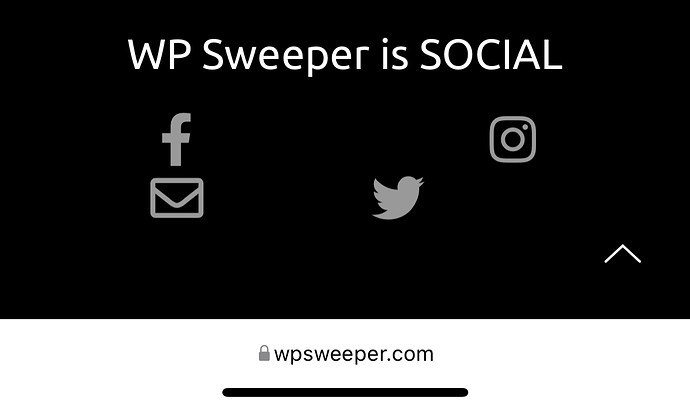 Thank you @Stewie_Griffin. I missed that one somehow

I’ve fixed it and will be putting the new version live tonight.

Hi guys, might I ask for a favor? I just put WP Sweeper on Product Hunt and I was wondering if any of you would like to upvote it?

WP Sweeper is a shell script built to automate cleaning of hacked sites. It has functions to automatically replace the files for the WordPress core, plugins and themes with new versions from the WordPress.org repository.

This would help to product tremendously. Thank you!

Not sure what it does, and I am not a big fan of WP, but I’m sure it’s a great tool if it’s coming from you! Upvoted!

Thank you Eldar, very much appreciated!
(also: now I know I need to work on my branding and descriptions

Well, I am sure I just need to learn what the shell script is