I am REALLY angry right now. Just lost 45 minutes of work. I pressed CMD+S to save my work. Nothing happened. A dialog box appeared: “Blocs is saving … this could take a few minutes …”

Is there anything you can add that may help me find the cause?

Blocs should never take 20mins to export, it sounds like it locked up on export.

I have no idea. I was working as i normally do and was styling things and writing classes. Then I did CMD+S to save and got the message I stated above. After that, Blocs was frozen. Nothing could be done.

It might be a consideration to have something like a temp file that gets saved when the software crashes. I’ve seen this kind of thing in some Adobe products.

By the way, I wasn’t exporting, just saving.

I know the problem exists when you are changing the fonts in the project self. Not at the beginning. And then is some like export bar at the top that says something like changing thumbnail properties and it takes long. It dismiss when you click save.

Auto save is actually already in the works, with a back up feature. its just not ready yet.

Please make auto save optional. I often mess around and see how things look. Close without saving if I don’t like the changes.

@gary so sorry to hear that happen to you. We all can relate to your frustration. At one time or other, we’ve all been there. Rest assure @Norm will be there to help.

Please make auto save optional. I often mess around and see how things look. Close without saving if I don’t like the changes.

Don’t worry I will, my plan is to make these backups separate to the main file kinda like a little time machine just for blocs files.

That would be super. Then if we really mess up a site we can go back to an earlier version.

Just wondered what the status is for the backup feature?

While making some changes in my nav bar, I somehow lost the hamburger icon. I didn’t realize it was gone and saved the Blocs file. I was able to get the hamburger back, by recreating the navigation again, but sure would have been nice if I could have opened a previously saved backup. I do try to create backups of my own periodically, but this time forgot to do so.

I know Norm’s feature list must be a mile long, but just thought I’d ask if there’s any estimate for backup feature.

Good question, I recently changed the internal road map so v3.3 now has a different feature list. This backup feature is part of the new roster for 3.3. Testing will commence late April/ early May.

The issue about the infinite ‘save’ … it happens when you work on a website which was created under the version before this one. I encountered the issue with all 3 websites I work on, lost my edits but it does not seem to occur after the first time. Still annoying.

I am, I’m just pointing out the autosave will be part of 3.3.

Could you explain that in more detail please?

Next time I will make screenshots from the running processes.

For now: Blocs run on the same fusiondrive as where I store the blocs-files and exports (pictures included).

When I download and install a new version and then edit one of my projects I get an infinite save (the bar goes to maximum and hangs from there) … it does not complete. When I save a project to a new filename the same thing happens. After forced stop and restart I can open the new file but it is obviously empty.

The old file opens and I can edit and save it without any issues from that point.

Ok I’ll see if I can replicate that and get a fix in place.

For me is not just a problem of version 3, the crashed happened also in version 2.
Several times I was trying to save the work and the app go to an ‘infinite’ wait.
That lead me to save any project constantly.

Besides that, every time I leave a project in version 3 to open another one the app crashes, it means it makes quit. I do command+w and it crashes. That did not happen in version 2.

Autosave will be very welcome! 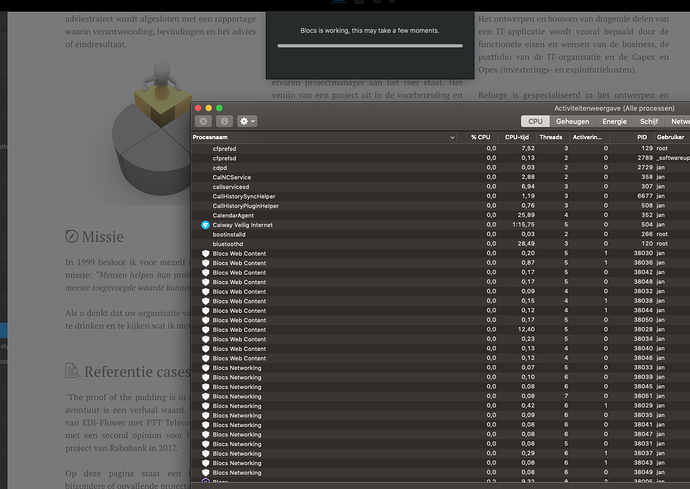 @Norm Switched project, on first save …