I am deciding whether I should move from Freeway Pro to Blocs and have been playing around with the trial version. It seems promising, I am getting a grip on many features. The only thing I have not been able to handle are the two thumbnail carousels. I have not been able to find a basic instruction on how to use them. I have never used one, so it could be a beginners problem. Anyone?
Thanks, Henk

What problem are you having exactly? You add the image via the appearance section in the side panel, which allows you to select images through the asset manager. If you want to define the size of the carousel that can be done by creating a custom class. 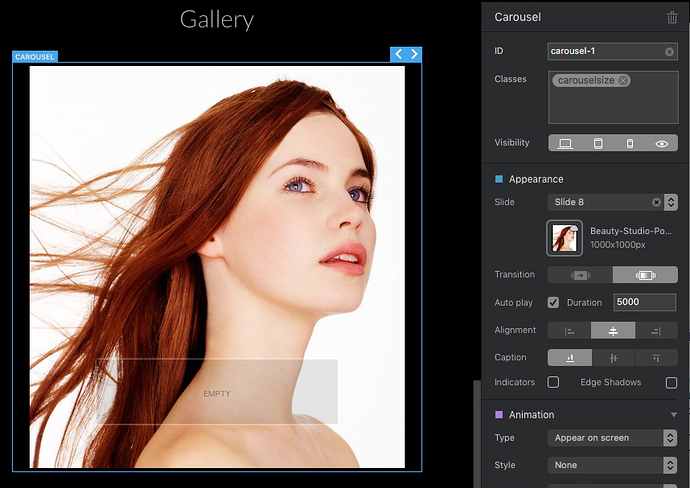 I am also a former Freeway Pro user, though I jumped ship about three years ago. There are pros and cons with all design apps, but I like the general direction and rate of progress with Blocs.

Version 2.5 is currently in beta but likely to be released in a week or so and I think we all have big expectations of version 3 later in the year. Having spent a lot of time working with Rapidweaver I have little doubt that Blocs will be the better longterm option.

I know Softpress is reportedly working on a new version, but it’s all too vague if you need to produce websites now and @Norm is doing a terrific job in advancing Blocs with new features.

Thanks Flashman. I am inclined to believe you on the advantages of Blocs. I have the problem specifically with the thumbnail carousel. I can easily produce a normal carousel. But I want the one where the thumbnails can be clicked to activate the larger one while the transparancy of the thumbnail changes. Here I can insert the slides from the asset manager in the large top field, but when I inert thumbnail versions in the field below nothing seems to happen.

The thumbnail carousel is only half finished at present and there are some anomalies I’d like to see sorted. For example, thumbnails can be chosen in three different resolutions, but the main image cannot.

I’ve had this working in the past with no difficulty, but discovered exactly the same problem when trying just now in 2.5b7. Basically the thumbnails are dead and not influencing the main image, which makes me think there is a bug here. @Norm Thumbnails are visible but not interacting with the main image.

Thumbnails are visible but not interacting with the main image.