How is everyone organizing their project(s) in terms of folders? I.e. example.com/blog/post

Do you mean tidy urls without the index.html bit at the end?

I guess you would have to do that manually by creating folders on the server and making all links inside Blocs via url rather than page. Updating would be a bit of a pain.

The reason I want tidy urls is because it would solve this problem automatically, since every page would reside in a unique folder that can be named prior to export. You also lose the index.html bit at the end and it’s far better for marketing purposes. example.com/about/

I have my blog posts organized into a blog folder and want to keep it that way.
So I’ll probably have to name the page: /blog/blogpost

This has been on the request list for a couple years now. I had hoped to see it included before Blocs 3 was released. I understand it might create some problems for old sites, but surely possible for new ones.

I also want to see this

Bringing back an old post, as didn’t want to start a new one. As I said in the Beta 3 thread…

Given that the folder names are derived the page names I wondered if some means could be found to generate sub folders for categories, allowing us to create a structure like example.com/services/painting/exteriors

I’m sure there is a few ways of achieving this, but 2 possible ways could be these, I’m no expert but i’m throwing my suggestions out there and it may help Norm. Maybe a layer tree where you view all your pages, so you can drag and drop pages to be inside the layer/folder its in?

First: Have a Country folder and then individual City named files as below (obviously there would be no file extension once uploaded onto the server) 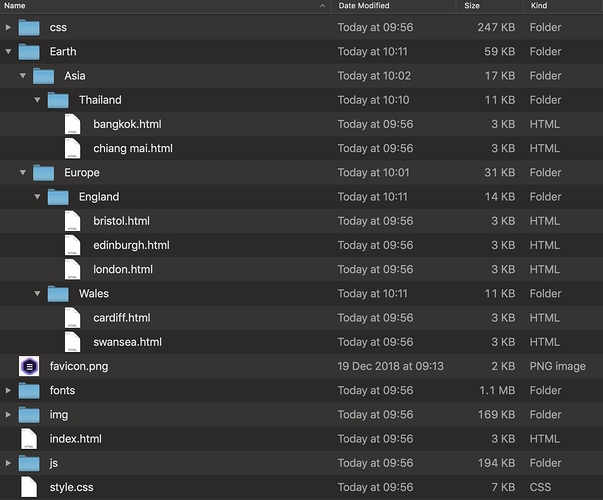 Second: Similar but slightly different with the html files names and the folder structure, but perhaps better organised. So this way has each file placed in a City folder rather than a Country folder, this could be better as it may allow you to add several different pages that relate to just that one City folder. i.e: 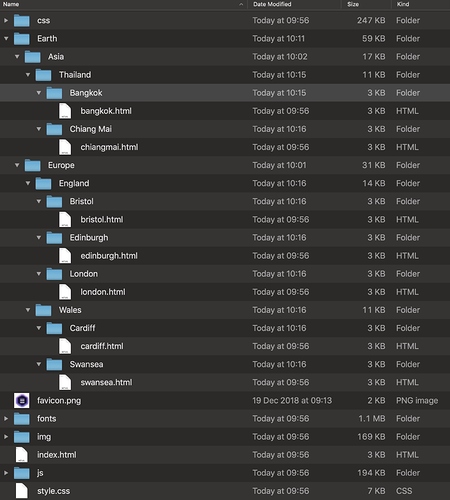 As I said, there are probably many ways of doing it and doing it better, but just wanted to share my idea’s as this is the biggest feature I’d like to see come to Blocs (I know its been talked about and mention a few times by several people) and now we have clean URL’s it would put the finishing touches on it.

I am glad to see we have changes that are an improvement on the old layout, because clean urls are essential if you are running any kind of marketing campaign with a landing page. They also look far better and make server management much easier.

The key point here as I see it is that you need to establish flexibility at the outset to create categories and sub categories. Hypothetically, you might want example.com/services/painting/exteriors and that isn’t possible at present with Blocs 3.1, however it’s good SEO and good for organisation, plus it makes sense to the visitor being able to see a clear order of navigation.

Norm’s current solution is undoubtedly simple, because it only requires the user to tick an export option. Rapidweaver does this by allowing the user to create folders inside the page settings. I wonder if this could be worked around in Blocs by adding a “/” in the page name to indicate where a folder should appear? If Blocs then sees ten pages that include /services/ they would all be placed in that sub folder. This would require some thinking through, but I wonder if it could work in practice.

I agree, I tried manually to do it but it’s incredibly hard and time consuming, but putting a ‘/’ in the page name is unavailable (for obvious reason I imagine) and reverts it back to all one word.

Putting a slash where a sub folder should be created sounds like a good idea, in theory it should allow the user too easily organise the structure, and hopefully not too complicated for Norm to implement.

I hope @Norm can look at this at some point in the future and bring it to Blocs.