I come from Adobe Muse CC. So Muse has many options that makes your daily life very easy.
I love Blocs and I want to become a permanet Blocs user but there are many things I found to be difficult.
I am not a coder. I am pro designer so Muse helped a lot because it’s made with the basics of PS, Ai, Indesign and so on… you have character options, links easy to make, add animations and pics very easy and so on… if you have ever use Muse you will know what i am talking about, hey! even if you have ever use Ai or PS.
What I really love about Blocs is how easy, well magically you can make one desktop page and boom! you got the mobile version without changing things and breakpoints and all that boring stuff. However, at this moment you still need to add some kind of code or something…
I wish Blocs can become much more design oriented.

Hi, welcome to the Blocs Community!

I have used Muse a few years ago, and from what I remember Blocs is way more pleasant to work with. It requires a little bit of time to get used to, but when you do, I am sure you will appreciate the features Blocs provides, instead of concentrating on what is different compared to Muse.

If you haven’t already, check out the recourses I have created to help users like you:

What I really love about Blocs is how easy, well magically you can make one desktop page and boom! you got the mobile version without changing things and breakpoints and all that boring stuff.

I really disagree with that statement - not because blocsapp is deficient in that respect, but because making a “desktop” design is not automatically a route to a suitable mobile version. Mobile designs in all but the simplest of sites should have more focussed content compared to their desktop versions, so it’s not as if blocsapp allows developers to automate mobile design. Bootstrap simplifies that process, but often we need to simplify our content for the mobile platform.

I wish Blocs can become much more design oriented.

Suggest some specific ways that could happen or where the deficiencies are right now.

I would love if blocs has or is:

I really like the way Blocs works and it can speed up the work progress. But at this moment I am stuck to many moments at solving problems. Hope Blocs 3 is a leap forwards!

Keep up the good work!

Be patient Blocs 3 is almost here, next week according to @norm.

In the meantime you can begin to see some of the new features via the Blocs Twitter posts: 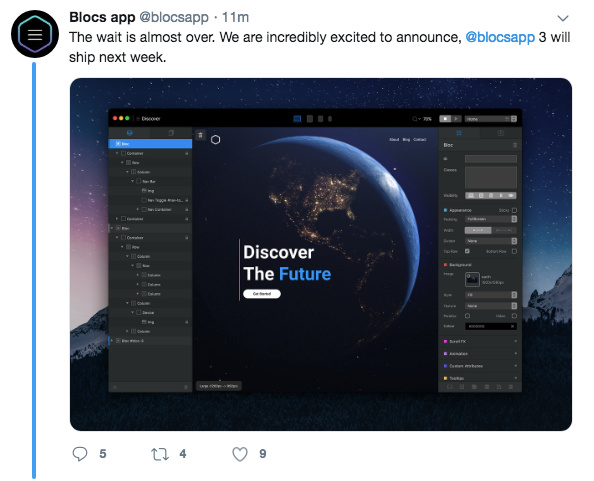 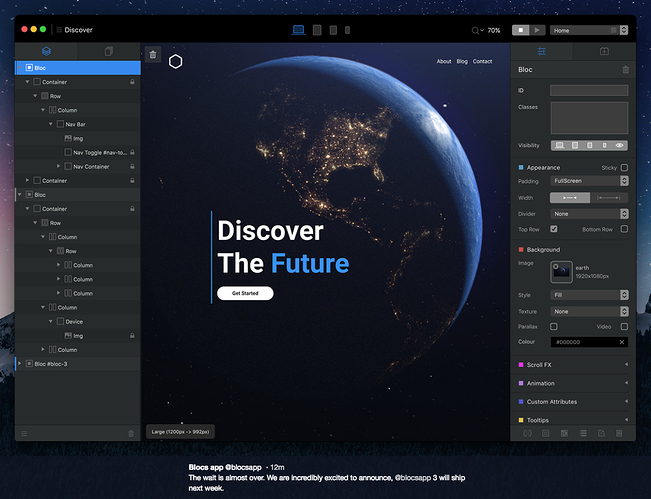 Be patient, the wait is almost over.

But I am sure @norm continues to welcome any ideas that will make the app better for everyone.

Wow, look very nice!
Like the DOM structure. And of course the Scroll X, Animation and Custom Attributes panels…

We’re in the same boat, and no Blocs doesn’t magically “Boom” create a mobile version, adjustments are required. I wasn’t expecting “Boom” I very well knew as per pretty much all site builder that readjusting desktop to mobile is required, I just wish Blocs was way more flexible for us designer. Got my fingers crossed Blocs 3 will be.

Its not totally free from but its a step in the right direction.

Can we get a video preview of it? I want to see what it’s got in detail.

This is a post I felt I had to comment on because I feel I should’ve posted something about Muse vs Blocs by now. I used Muse for many years, and made the leap earlier this year after Adobe decided to commit suicide.

Muse was great if you are on a graphic design background (me), so, I agree, it was so easy to move from Illustrator/PS into Muse.

Like Muse, or really any new app/software, Blocs came with a learning curve for me. I used a lot of resources (Mostly from Eldar) and doing various searches of old posts here on the forums. These resources were (and still are) invaluable for me, since this program comes with a learning curve for us non-coders. (Unlesss you are just doing a simple page that doesn’t require any massive design alterations. Which, really was the basic intention of Blocs form the beginning, I think). So, yes, unlike Muse, Blocs doesn’t allow as much creative flexibility. However, that creative flexibility came with a price. And that definitely helped Muse kick-the-bucket.

Learning to forget the “I can drop this anywhere” to “I have to follow Blocs rules” is a bit stifling at first. As you learn how the classes work (again with resources), it starts to click pretty quick. I have even figured out a few ways to get extra creative with the classes - probably pushing them way beyond their intentions. Thank you again to the forums and Eldar.

BUT that doesn’t mean there haven’t been any issues along the way! That’s for sure.

Some problems I’ve run into in my experiences this year with Blocs:
• Some classes aren’t listed anywhere within the program itself. They exist, but are hidden. Not fun.

• Sometimes classes don’t communicate well with one another. I have had to make a class on top of a class to combat this problem. When this does happen, I don’t even realize I am doing it sometimes. And then I have to figure out where I accidentally made overlapping classes. Not fun.

• If you create a class, alter it, then delete it, the class is still there. It doesn’t forget what you did. But it pretends that the class doesn’t exist. Not fun.

• Knowing what values/variables you can put inside of a field in a class details page. For example, after a good solid 6 months I didn’t know you could put “auto” in some of the input fields. So, to center an object on the page, you have to put 100% for the width input, and then “auto” on the left and right margin inputs. Very complicated, and not obvious to a newbie, at all. That one actually made me so happy when I found out, but so sad that it wasn’t obvious from day one. It felt like a secret the cool kids knew that they wouldn’t share with anyone else.

I am a designer. I like having 100% control of everything visually. Every. Single. Detail.
If you are a control freak like me, Blocs will cause you headaches. I promise. These headaches occurred mostly for the bullets I just listed above, but also somewhat from the transition from a visual designer software to a software that feels more coder based. But the headaches I occurred trying to make responsive work fluidly and happily in Muse turned my hair grey. I will never go back to do doing that again. I did say that Muses’ death was a blessing in disguise due to all the stress it caused me.

So! My advice with using Blocs (Pre version 3 coming out next week):

Keep it simple. Don’t over design anything, at all. Less is more. (Sounds like college design 101 all over again).

I hope Blocs 3 and future version can be more design oriented, sure you can keep all the coder options, I think designers need an app like Blocs with very good design software options, that could be awesome. No need to add an image anywhere you want, I’m ok with the blocks idea.

Hi! For using blocs you only need to know the basics of html and css. You can learn these basics in one week with the help of some online courses for less money (eg udemy) and this knowledge is never wasted time or money, also for a pure designer. With this basic knowledge you are able to work in a free and creative way with blocs. Blocs is exactly what I have searched for a long time.

I am a designer. I like having 100% control of everything visually. Every. Single. Detail.
If you are a control freak like me, Blocs will cause you headaches. I promise

The problem with that concept when it comes to responsive web design is, what you see is very different to what is under the hud. Offering that level of freedom is sometimes just too complicated. Blocs V3 offers a lot more freedom but it’s spread across the entire app and not entirely focused on freedom on the canvas. But V3 is a nice step forward regarding a more design-like approach to sizing and positioning.

I’m ok with the blocks idea.

The “blocs idea” is not actually a blocsapp idea it’s because of a framework called “Twitter Bootstrap”. Almost everything that is available in blocsapp is governed by the way that bootstrap and HTML/CSS works.

I hope Blocs 3 and future version can be more design oriented, sure you can keep all the coder options

What’s the difference between adapative and responsive?

Responsive designs will re-flow their layouts to fit the available space within a horizontal break-point (ie the mobile, tablet, desktop sizes in blocsapp), so text gets longer to fit a narrower space.

Adaptive designs don’t re-flow their content, they layout for a particular horizontal space and will not re-flow that content - they snap between horizontal breakpoints. The good thing is that you can place things anywhere. The bad thing is that they aren’t ‘flexible’.

The problem with responsive layout is that while it’s excellent for re-flowing content to the available space, specifying how that re-flow should behave is not so straightforward in a design program like blocsapp. That underlying behaviour is controlled by the HTML constructs used and the CSS design controls overlayed over that. The problem that blocsapp has is in allowing access to that behaviour in a visual interface.

In a design program like illustrator the designs are static so re-layout and re-flow between various design sizes is not an issue. In blocsapp it is and all kinds of solutions to this have been tried in the app design world and there is no universal solution.

Blocsapp allows you to design without HTML knowledge, but gives you the opportunity of more control if you take the time to learn something about HTML, CSS and bootstrap.

I think norm has struck a good compromise.

If you want Norm to make blocsapp more design friendly, you should be specific about how you think that should work.

Sorry for the TLDR;

I just meant in comparison to Muse. Sorry.
The process of understanding how Blocs works out-of-the-box isn’t drop & drag friendly like Muse was. Which is why I was saying it was so easy to jump into Muse with having a background in graphic design (using illustrator and PS).

Right - but some of us don’t want to learn the coding because we aren’t good at it. We like to find the best way to design without it. Is it a realistic approach to web design? Probably not in most cases, but it worked well on Muse for the most part.

I’ve been keeping my eye on SparkleApp … seems like anything you can think of (on grid or not) is doable. It’s completely free-form, drag & drop, and works in layers. You should see the text-wrap around images … pretty amazing.

I’d love to see Blocs incorporate some of these creative, non-structured ideas at some point