you have to create the custom class ".nav>li>a " and then in the Typography options center the text. 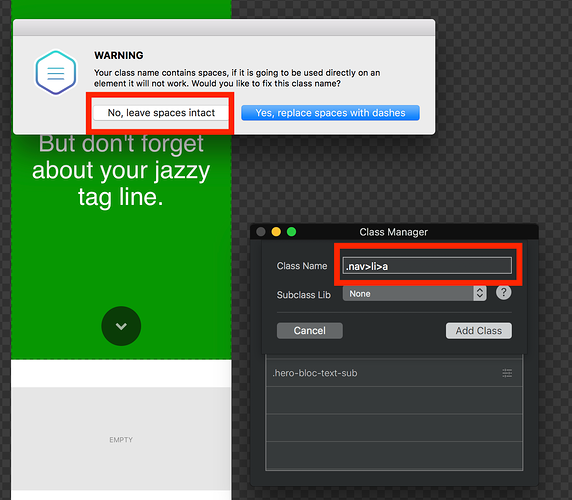 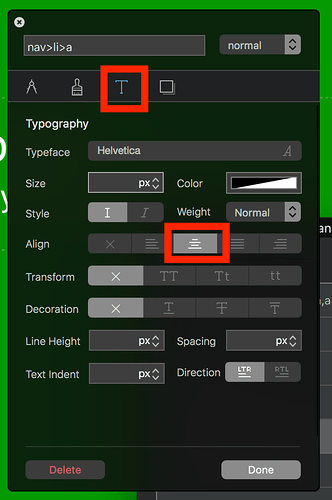 Thx a bunch…just select the mobile menu icon add class and take it from there? I’ll give it a try. I do this with basic code all the time but couldn’t seem to get the correct target to add the class to. Thx again:)

Yup…that worked! Brilliant. Thanks for your help.

Hey. unfortunately it doesn’t work. please see the image. there are bullet points an a code. 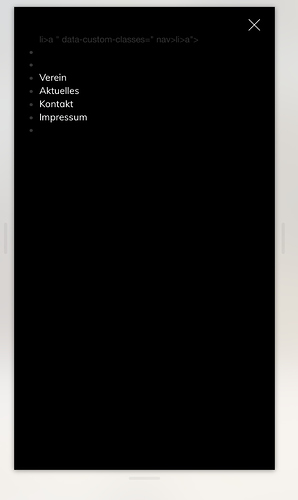 You might need to target the class with the bullet points. I’d need to be in Pinegrow or Google/Safari or other Development tools to find it. I don’t know most of this by memory. I’m sure someone else here does. But it should work.

I just spent quite a bit of time looking through code to see how Text was centered on the Solis mobile menu. We had to export the website to html open it in a Dreamweaver To see the mobile menu breakpoint size. It was 767 or something like that. I know there are other things we could do like use Google Dev tools etc.

Found a little class called “pl undefined” …We left centered the mobile text on purpose just to see if that was the right one. It worked but gee…I can’t stress enough how much easier it would be for a “no code” visual app to just have pre made Brics or Blocs ready to go…so much more efficient…Everweb has most of what you need …except its adaptive not really responsive. They also have the SEO functions correct.

If a simple audio player for example is only a few lines of code why not make it part of the Bric tool box to build sites fast. No code?

After looking through dozens of apps that claim to be “no code” visual apps the need for code rears it’s ugly head at every turn or the code it writes is a mess.

Blocs by far has some of the nicest well organized code. Norm is adding much. I do hope lots more native useful Brics are included soon…sorry for typos…ipad.

i agree with you. i used everweb before brics. this is a very cool software to build websites. but everweb can’t do responsive websites. this is the problem. the integration for many brics is very simple and the drag and drop is very easy to use. blocs is better for me. but we need some more helpful brics in blocs. please @Norm

Blocs so far is the best I have found. I’m hoping to help improve the SEO “adds” …I don’t know how Norm does this all single handed. It’s interesting Adobe Muse and it’s purported 12-15 engineers and support with a project manager could not make it work well enough to h@ve to have cancelled its development.
Makes one wonder …